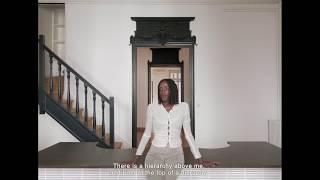 Trailer "ARE YOU READY TO TRY THE ARTIST'S HABITS ?"
Private video

No School But your Love
Special Feat.
Silent stream corporation

New Noveta - Sansa for me

At the beginning of the 1980s, many American TV viewers found themselves watching a blank screen whilst in the middle of a TV broadcast. The show was Andy Kauffman’s “The Going-Too-Far-Corner”. It was a bold move for someone whose producers were, to put it lightly, not fully convinced of his outlandish approach. After closing the program with a friendly “bye bye” the show then abruptly cut to a shot of a middle-class living room in which a couple could be seen supposedly watching the show. The man asked his wife “what’s he doing now?” to which she responded nonchalantly: “Oh he’s playing with the medium.”

At a time when the television’s materiality still influenced the arrangement of domestic space – the time spent in front of it representing the reverse in a division of labor time – the game played by Kauffman could already be said to have taken place “between the images”. This phrase, coined by Raymond Bellour ten years after that broadcast referred to the nature of the new images circulated by broadcast media as occupying a place of passage, between the immobility of painting and photography and the movement of cinema and video; between figuration and dispersal. By extension, the round the clock flux activated by the acceleration of televisual transmitters, established itself as a “placeless place”. This flux, which was previously ‘on air’ and today ‘online’, appears more than ever as something impossible to fully recognize. In the face of this relentless and dematerialized stream, each one of us becomes as much a receptor as a transmitter. We are mobile, portable, integrated, connected and accelerated.

Within this acceleration predicted by Bellour, and perhaps as a way of avoiding free-floating information, the new means of distribution are situational: content is linked to a user accounts. Even if the nature of the transmitted message is without address, it is not without specificity. It is always organized by ecosystems whose algorithms tend to set regular traps for us. Today, every activity or production feeds an ever-increasing number of algorithms to the point where it becomes in vain to attempt to try and designate these writings or their resulting data. However, through the influence of the market, the distance that used to be imposed by technology has considerably narrowed. Before, it was the remote control that put us in the seat of the programmer, something that was reinforced as soon as TV became an entity in constant transition. Today, beyond programming, the production of live broadcast has become widely available and generates a multiplicity of amateur communities, actions, attitudes and writings that are devoid of external moderation. As Bellour already explained: “everything, absolutely everything, happens on television.” Perhaps it happens now to the point where within the deluge of information, content that is artistic or not is joined together, assembled precariously by the viewer-programmer’s desire.

In 2014, Benjamin Valenza with Lili Reynaud Dewar borrowed the term “Performance Proletarian**” from Diedrich Diederichsen to point out an immanent creative class that appeared under the conditions laid out by new technologies of production and the circulation of artistic content. This new class, Diederichsen writes, “does not function as a working force but as a life force, displaying the products of its creative activity as a continuous stream of energy, agility, charm, and talent.” Within these deregulated and de-professionalized conditions, TV has ceased to function as the negative reflection of our labor-time. It is accessible from everywhere, dematerialized and in real time. Since the medium is now available, it is time to play with the message.

Now that artistic practices and new mass media are inseparable, something that was impossible to imagine in the recent past, we choose to hold this mainstream and amateur position. To imitate rather than oppose, and to generate a space within, where artists are not just creating a single program, but modeling an entirely new form of media to distribute their work.

This media is LABOR ZERO LABOR.

Playing with ideas of entertainment and the event that define live TV, LABOR ZERO LABOR reflects upon the ways in which our understanding of the culture of public speech can be resynchronized.

Beyond the relationship between performance and entertainment technologies, LABOR ZERO LABOR focuses on an ecosystem linked to a post-media community with its own autonomy, its own method of live action, and its own programming language. In this deregulated, neoliberal system described by Diedrichsen, each participant, whatever his or her position, has agency with the programing. It might be about shaping a common project again, creating organic and social alternatives, reviving the ‘relational’ – an idea that was central to many artists in the 1990s who sought for new modes of distributing labor and free time. At that time, TV was considered a tool of social mediation, which allowed relations to form and new narratives to be written. The availability of the camera to the general public allowed new forms of mutant social organization. In our current liberal context of labor flexibility and wide access to entertainment technology, we pay attention to the experience of the screen and generate an open and collaborative aesthetic. Adding new language within a preexisting flux, conscious that playing with the algorithm implies taking risks and letting go.

Performances, talk shows, sitcoms, video, literature, music, and poetry… Our program cannot be shaped like a manifesto. Because the strength of TV has forever been linked with its capacity “to generate confusion between description and prescription.***” This positive confusion, the merging of content, whether artistic or not, comes from the interface between producers and spectators. Whether in the shape of the remote control, the screen, the navigator or the algorithm, we see programming as a positive loss of control, as a form becoming autonomous.

We are all prosumers, and there is no rendezvous, no grid, but the choice to go online, to participate or to disconnect.

This is this original entanglement of contents that we consider as the specific code of our programing. Beyond activism and pragmatic political considerations, the LABOR ZERO LABOR program proposes to challenge the format of TV and to unfold its technical potential for radical redistribution of its distribution capacity.

Each broadcast directed by LABOR ZERO LABOR is semi-clandestine. This entertainment comes close to an impossible venture within this virtual, accelerating, placeless place. But broadcast is there. It is complex to speak about artist’s media without drawing a quantum map of these unformatted places, including the many projects that crashed because of precarious economy or that were simply left unattended. Projects known only from drifters viewing impossibly late time-slots. Let’s occupy this space, let’s produce it, program it, direct it and watch it on LABOR ZERO LABOR!